In a move condemned by both the UN and Amnesty International, water cannon were deployed against unarmed peaceful protesters, including elders and children, during freezing conditions. Journalists on scene reported ice forming on the protester’s clothing and skin, triggering cardiac arrest in one elder, who is currently in a critical condition in hospital. Latest reports state that over 300 people are injured, with 27 needing hospital treatment for a variety of injuries including hypothermia, fractures, sight and hearing damage and injuries from rubber bullets. One unarmed 21 year old woman, Sophia Wilansky, suffered a direct hit from a concussion grenade which injured her so badly she is now facing having her arm amputated (you can help with her medical costs here ). She remains in a critical condition.
The Standing Rock Sioux Tribe have been protesting the pipeline since April, and during that time Ungagged has witnessed influential voices within the camp, including Ruth Hopkins, who gives us regular updates when she is able, repeatedly requesting that protesters standing with the tribe remain peaceful and unarmed, to prevent law enforcement using that to excuse excessive force. As she said on twitter:

Live streams from various media organisations, including Unicorn riot, show protesters either standing still, dancing, or trying to hide behind makeshift plastic shields, while they are attacked by police who stand behind a barricade of razor wire, concrete barricades, and burnt out cars.
Nevertheless, mainstream news organisations in the US have described the Protest as a “riot” and have unquestioningly accepted the sheriff spokesman’s explanation that the water cannon were used to try and put out fires set by the protesters.

The tribe insist that the fires were in fact mostly started by police, although they say some were started to try and combat the freezing conditions. Given that so many people in the camp are suffering hypothermia after being doused with freezing water during the coldest part of the night, this doesn’t seem unreasonable. Live stream footage clearly shows a few small fires, which are not out of control in any way, and water cannon being directed squarely at protesters, and journalists who are nowhere near the fires. At one point during the livestream, the water cannon trajectory is changed to aim the water blast at media drones streaming the atrocities to social media.
It seems self evident to me that if the police were bravely battling a violent riot without using excessive force, they’d have no problem with being filmed, in fact would welcome it. Instead, they are reportedly using signal jamming equipment to interfere with live streams and social media access. Police in the area have refused multiple requests to confirm or deny this.
The conflict began around 7pm (ET), when the Water Protectors made a further attempt to remove the blockade of burned out vehicles at Fort Rice on Highway 1806, erected by the National Guard on October 27th 2016, to restore access to the road. The police responded by forming a line to kettle the Water Protectors on Backwater Bridge, firing water cannon from one side and tear gas, pepper spray and rubber bullets from the other. Trapped in the crush and unable to escape the gas, which is designed to induce panic and reacts painfully with water, protesters were reportedly vomiting and losing control of their bladders in response. A journalist from Unicorn Riot was shot in the abdomen with a rubber bullets, which tore through their press pass.

Despite calls of condemnation from leading human rights groups, Mandan Sheriff Jason Zeigler is unrepentant about the use of water cannon, and won’t rule out using them again.

“It depends on the circumstance, if it’s the force necessary to maintain control and order and to keep them from throwing rocks and burning logs at our police officers to try to, you know, maintain law and order, yes,” says Zeigler.

This would appear to be in direct opposition to their position two days prior to the use of water cannon, the 18th November, when the sheriff’s office put out a statement of concern for the protesters, citing the cold temperatures and wind chill as potential dangers, and offering advice to protect from hypothermia, frostbite and pneumonia particularly for “infants and the elderly” who they are aware are in the camp.
Morton County sheriffs office confirmed that there had been one arrest at the protest, and that one officer was bumped on the head with a rock. 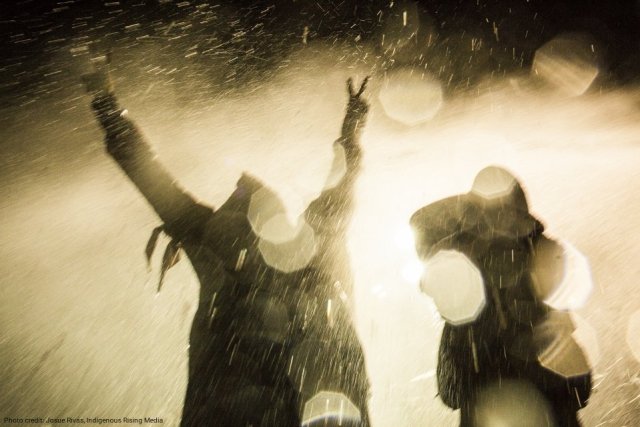 How to help:
• You can contribute money to the protester camp’s official GoFundMe account, which will go toward purchasing water, food, propane, blankets and other supplies. Cheques, cash or supplies (an extensive list of what they need is here) can also be sent through the mail to:
Sacred Stone Camp, P.O. Box 1011, Fort Yates, ND 58538
OR
202 Main Street, Fort Yates, ND 58538
Alternatively, you can also supplies via the group’s Amazon WishList.

• You can also donate to the Sacred Stone Legal defence Fund
Protesters have set up a legal defence fund to help defray the legal bills of those involved in the protests. To save the group processing fees, you can also donate directly to their PayPal account at freshetcollective@gmail.com.
• You can call the people who have the ability to do something.

As a front line charity worker, never have I seen such destitution and poverty as I have just now; this is significantly impacting on Scotland’s future: our children. Poverty has run through generations of Scottish families and has now reached tipping point. At a time of global crisis, both politically and economically, I can look closer to home and see the effects of the situation on my own doorstep. TV ad’s from charities encouraging support to the third world have always […]

Sleepwalking to the Abyss

This piece originally appeared on Allan’s  website 2016 has been some year so far. A year in which Scotland once again failed to qualify for an international football tournament and 2 months into the new qualifiers already look out of the next one. A year which every celebrity is wondering if they will […]

One thought on “Battle of Backwater Bridge”