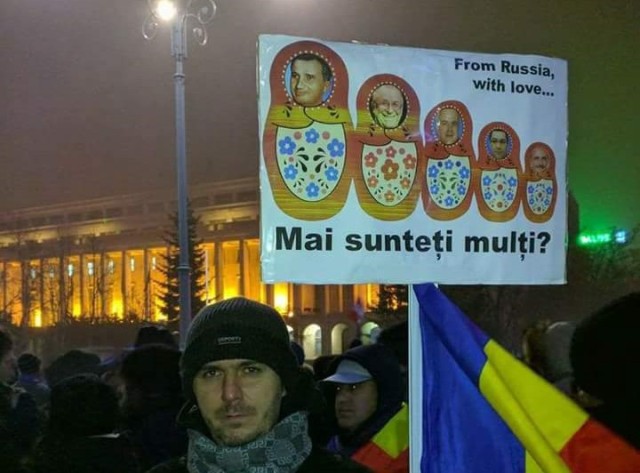 Up to 800,000 Romanians travelled across the country to protest an emergency ordinance in 10 degrees Celsius below zero. They’re now into the third week of protests and still not going home, though numbers dwindled. The ordinance was a late night attempt by the crypto communist party to pardon corruption where the financial bribe/damage is below £37K. The criminal code was altered. Romanians, with a strong record of standing against oppression, organised huge crowds in front of the Parliament that caused the government to withdraw. But the crowds didn’t withdraw. They want government to resign.

This is evidence of the high level of sophistication among protesters, many of whom have participated in several waves of demonstrations in Romania since 2012 and become skillful at calling public institutions to account, communicating and organising.

During the 1989 revolution, in the lengthy protests that followed, during the mineriade, for Rosia Montana and during the last presidential elections, Romanians displayed a healthy inclination to take to the streets. In the murky waters post december 1989, Iliescu, the new unelected president from Ceausescu’s circle, had the students beaten and killed by miners who he then also subsequently betrayed. But since, these protests proved quite successful: the goldmines in Rosia Montana didn’t receive clearing, and the Canadian company was sent back empty handed after it hoped to exploit our mountains and leave them bereft, ecologically downtrodden. A nation of angry people who have been so often oppressed, their eyes are open and bullshit from the media sticks less. Perhaps there’s a lesson here?

The newly re-elected social democrats were most likely behind the coup against Ceausescu that hijacked the 1989 popular revolution. They were communists with Soviet support to steer communist Romania away from Ceausescu’ independent direction. With a strong foothold in the Security services, in the aftermath of Ceausescu’s execution, when the newly rebelled youth realised that their efforts served as cannon fodder for the new kleptocracy, the social democrats had no qualms to kill and hurt dozens of protesters. Thousands of students protested for months and then years against the hijack, but they were squashed by violence and smeared as hooligans in the press. So the crypto-communists ensured power stayed in the hands of the same people, who were now oppressing not via communism, which is inefficient, but neoliberal capitalism, the trusted tool of new age tyrannies.

They embarked on a mission to vandalise the national patrimony and sell national resources while the process of privatisation was sold by the press as desirable progress. Intermittently in power, they never did loosen their grip over the economy. Voted back into the government last fall, they passed an emergency ordinance to exonerate themselves of corruption in office. Over the past decade Laura Codruta Kovesi, chief prosecutor of the National Anti Corruption Directorate, has been prosecuting politicians at increasingly high levels (even the former PM Victor Ponta), making the fight against old style corruption a promising triumph. A solid three decades of high level bribery gangster style is coming to an end. There is uncertainty over the purity of election results, but fact is the first thing the social democrats did once in power is try to adulterate the criminal code to exempt themselves: decriminalise abuse in power. This alone is sufficient reason for Romanians to take to the streets.

And it’s a good example for the West, if the West cares to listen: instead of protesting against futile and vague causes in vagina outfits, perhaps protest stubbornly against corruption. To my great chagrin, Romanian corruption seems quaintly small beans compared to hi-fi, stealth UK corruption that is sanctioned by all levels of the establishment and disguised as ideology. Austerity kills. The Romanian bribes amount to loss of cash for the public pocket; the Tory cuts amount to tens of thousands of deaths, an unabashed cleansing of the poor, ill, disabled and old. How far does this have to go before the British public reacts? So far, facts about the extent of the government crimes in this country are met with milquetoast patriotism for a state that provides 10,000 flavours of biscuits at the supermarket, that is, if you work 50 hours a week in an office or 10 in zero hour contracts. Look at this recent analysis by the Royal Society of Medicine, counting the cuts-related NHS deaths to 30,000 over the last year. The government of the free first world is emerging as the number one cause of unnatural death of its own people.
OLD TYRANT’S DEAD, LONG LIVE THE EU TYRANT

The more worrying development from back home is voices calling to EU for help. I have nothing against people protesting government, in fact it’s a healthy last recourse of pseudo democracies where we’re no longer represented. But the Stockholm syndrome call for justice from the EU equates to jumping from the frying pain into the fire. Corrupt as the Romanian government is, the EU holds unparalleled status in stealth thieving capabilities. Over the past decade, our natural resources have been devastated by Austrian, American and other companies that poison the environment and leave ecological disaster behind. The fact that they EU legislation protects them so the theft is legal is no consolation of mine or anyone with a conscience. If anything, makes the process all the more monstrously inescapable. The law is made by the thieves, for the thieves. These new thieves are corporations and foreign governments with an eagle eye on our rich natural resources. 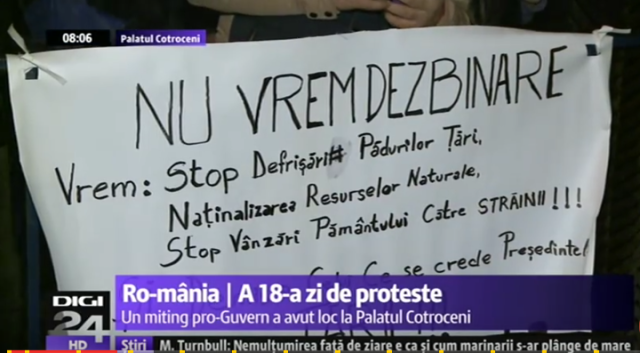 The probable reason why the average brit voted Brexit is EU bureaucratic corporatism and pan-national undemocratic rule; the same things that affect Eastern countries whose membership went from longstanding aspiration to bitter disappointment really fast. The relics of communist corruption are on their way out for the Romanians; the real common threat to both east and west is really the new globalism that writes the law and trumps human rights for profit. Tory rule is just the British arm of this new system and it’s ruthlessly eliminating anything that doesn’t lead to profit — this often happens to be lives of those on the economic fringes. Austerity is eugenics. Let there be known there is no natural law that assigns the presently economically successful as the only worthy of life, healthcare and resources. We are all born of the same land, bankers and paupers. The Romanians, though, have been angry for longer so better placed to identify threat and stand up against it, even in freezing snow storms, than the complacent British who have had their edges filed by a deceptive, lulling, pseudo economic success.

Romania’s national hymn says “Wake up, Romanians!”. I would say the same to the British, following from the Romanian example — since the rest of the world reflects closely the empire, and what happens here, concerns the rest. If a hundred years ago a state could hope to liberate itself only by liberating from its local tyrants, in the world of today it all leads up on the global pyramid, so local liberation futile unless you reverse the new pan-national corporatism. Read Frankie Boyle’s last piece in the Guardian until the end for his and mine proposed course of action.

P.S. While everyone was longingly praising the rising Romanian civil society, 500 US troops and tanks were stealthily moved in Romania this past week. Hm. Wonder what that is about

The silence of the left should shame us all, says Neil Scott

A Tale of Two Revolutions: Russia and Iran

After Tom Perez’s “Night of the Long Knives” purge of progressives and entrenchment of centrists at the Democratic National Committee, no self-respecting leftist can hold anything for the Democratic Party but contempt. A thoroughly corrupt organization cannot be reformed, period. Capitalism cannot be reformed. Neoliberal bodies such as the EU or the UK of GB […]

Bioma is a feminist queercore band, founded in 2017. The band arises from the encounter of four women from São Paulo (Brazil), carrying a intersectional feminist speech and libertarian (left-wing, anarchist), anti-rascist, anti-LGBTfobia and anti-CIStemic posture. Bioma’s lyrics are a direct reflection of what happens in politics as a whole, as well as the band’s […]