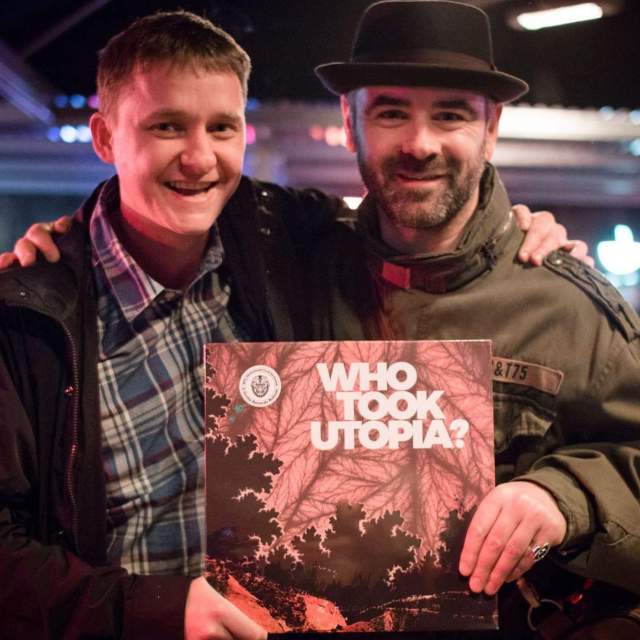 Girobabies give you baffling grunge soul music with a dollop of psycadelic dystopian elbowgrease and a pinch of gutter-rock utopian lyricism.
The Glasgow based band have just released their offical debut album ‘Who Took Utopia?’ to critical acclaim. This was a self-produced and self-released follow up to Two mini LPs ‘Bus Stop Apocalypse’ & ‘Social Not Working’ and a secret album called ‘Taxi Driver Rumour’ where the Girobabies used an indie/grunge, almost punk, backbeat to deliver pertinent political/social observations akin to the likes of the Sleaford Mods, The Streets & The Fall.

As well as being the frontman with the Megaphone, McG is a renowned poet, writer & spoken word artist under his alias Jackal Trades. Guitarist Robbie Gunn (also performing solo under the guise of Sun Dogs) is a leading Glasgow producer. Drummer by trade, Gordy Duncan JR is also a well-respected solo artist (releasing his debut album in 2015). Recent additions of Jess on Keyboards and the Bass of renowned DJ & Producer Jo D`arc (also of the Twistettes) has refined the balance is this multi-talented band of artists.
Self-funding everything they do, in the truest DIY spirt, the Girobabies have made a name for themselves be being stalwarts of the summer festival scene and gigging the length and breadth of the UK – culminating in a co-headline slot at the legendary Barrowlands. Appearances on STV, airplay and BBC 6 Music continues to propel the band into the consciousness of music lovers everywhere.

Pauline Bradley an Irish born singer/songwriter who has travelled extensively, picking up musical tips, styles, songs and tunes on the way. She writes songs about social issues, love, pain, injustice, human struggle, poverty, happiness, joy and everything else! Pauline sings songs from artists who may not be well known as well as classic sing along […]

Punk pop three-piece Mower, once described as the ‘poppy Sonic Youth’, are returning after a 12 year break with the release of digital single Under The Iron Thumb via Reckless Yes Records on 21 July 2017. A blistering return Under The Iron Thumb is high-octane lo-fi garage pop that gives side-eye to the political situation […]

Argonaut are purveyors of fiery female fronted alternative punk rock. The band released their self titled debut in 2012 and have recently unleashed their second album, Try. Comprised of Lorna on vocals, Nathan on guitar and backing vocals, Abby on synth, Guitar And Backing Vocals, Joules on Bass and Oz on drums. You can find […]