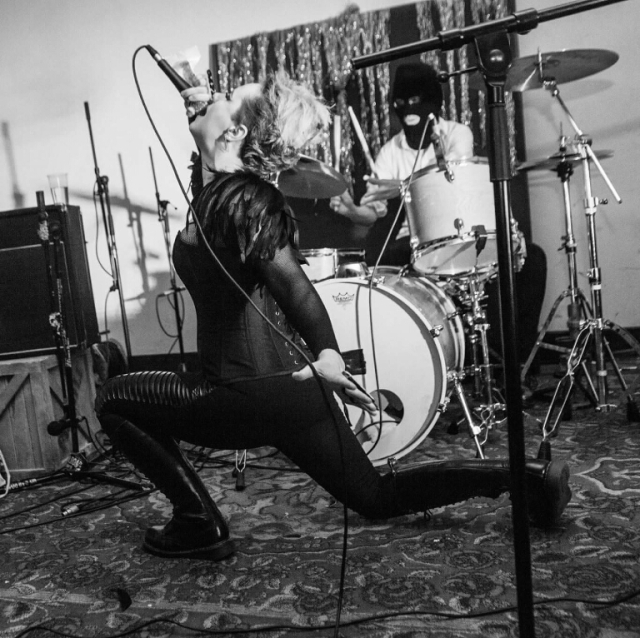 G.A.Y.R. is the product of some trans(atlantic) queers making a mess with instruments in hand. As an ode to the Figure of the Gladiator in the recent past and the sometimes long and forgotten legacy of humanity’s struggle against itself, G.A.Y.R.’s Greatest Hits EP pays tribute to our fallen comrades (whether televised, preserved through writing, paint, sculpture, or immortalized in tales of yore). Sifting through those back alleyways and underground passages of future-Time, G.A.Y.R. emerges as the masked brigade of an all out war against complacency with this world. Testo-fueled, spandex clad, and enraged at the core, G.A.Y.R. makes some queer noise without respect to national borders; this noise being something to clear the air from the suffocating onslaught that claims to inspire something other than dread at the fate of terrestrial life.

And as daily drudgeries now serve as the true motor of our history everyone panics that an increasing number of the population simply no longer gives a fuck (#dgaf). G.A.Y.R. finds something of value in this. If there is nothing to give a fuck about, don’t feign the zeal in the hope that delusions can be substituted for reality. If there’s nothing to give a fuck about, then make something worth giving a fuck about; something worth fucking with and about. Since, let’s face it, we are being confronted with a new kind of hot, psychotropic, punk world order. Today, the floating mass known as the ‘plastic island’ in the North Pacific that is supposedly the size of Texas has become the largest water architecture of the twenty-first century.

So it’s clear we’ve been fucked for a while. No one is coming to save us but we have some time to kill before total societal collapse. Now the only question is what to do on our way out? G.A.Y.R. encourages you to be worthy of our own fall from terrestrial grace and imagine for the time left the components of a refashioned gladiator-techno-punk armature; the updated software of a war-machine program; all the better to fabricate a new aesthetic paradigm worthy of our time. A type of fusion between Spartacus and that Y2K virus that never arrived. Well, better late than never. So, contestants… are you ready?

The ethical debating society started as a pseudonym for Tegan Xmas writing anti-love songs on her hooty piano. It blossomed into a full band, now with Kristen Martin on guitar/vocals and Elizabeth playing pots and pans. If they are trying to prove anything, it’s that music is for everyone to have fun with, not just […]

Formed in MK in the summer of 2017, Indie/Rock ‘n’ Roll bringers Candidates are standing up to deliver ‘punch the air, uplifting’ songs, in a time when there is so much noise – but not enough being said! The band was created when singer/songwriter Steve Wells (formerly of The Vision, FalloW & Colony) posted a […]

All about feelings and screaming, Little Fists have been described as “melodic guitar, sad lyrics, suddenly loud shouting and screaming…. For fans of Modest Mouse, Explosions In The Sky, Where’s Hollywood?”   Follow on facebook, twitter, and bandcamp