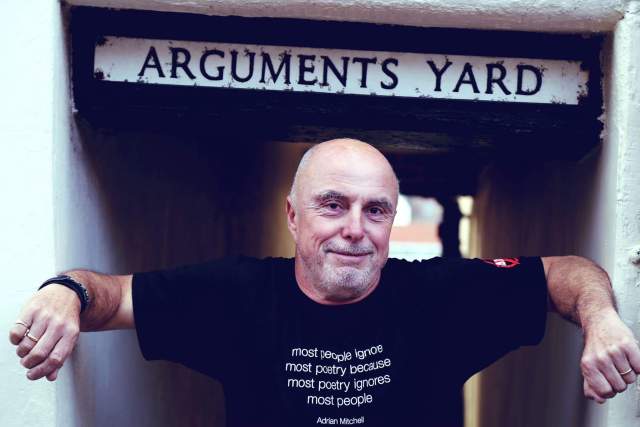 Sharp tongued, high energy, social surrealist rebel poet and songwriter. My themes are topical, my words hard-hitting, my politics unashamedly radical, but I aim to make you roar with laughter as well as seethe with anger……

Inspired by the spirit and the ‘Do It Yourself’ ethos of punk rock, and above all by The Clash and their overtly radical, political stance, I started as a punk bass player in 1977 and took the name Attila the Stockbroker in 1980, blagging spots for my poems and songs in between bands at punk gigs. I quickly got a couple of John Peel radio sessions, a deal with London independent label Cherry Red Records and before very long was on the cover of ‘Melody Maker’. I haven’t looked back since! My 30th anniversary as Attila was September 8th 2010.

I have performed my work across the world at literary and music festivals, rock venues, arts centres, pubs, universities, schools, folk clubs and punk squats in the UK, Australia, Canada, New Zealand, the US, Germany, Austria, Switzerland, Poland, the Czech Republic, Hungary, Italy, Finland, Denmark, Norway, Sweden, Holland, Belgium and the Basque Country – and more improbably in Romania, Bulgaria and a hotel basement in Stalinist Albania.

I can, and do, gig just about everywhere: I’ve created my own global network, and organise most of my hundred plus performances a year myself, as well as running regular spoken word/music events and the Glastonwick Beer Festival here in my native West Sussex. As well as all my solo gigs, where during my songs I accompany myself on mandola, I play violin, bass guitar and a variety of early music instruments and from time to time gig with my band, BARNSTORMER, a unique and energetic mix of punk and early music!

Myself and the band have 4 songs and live footage in a major German feature film, ‘DoppelPack’ which was released across the German cinema network on August 17 2000. My latest album with Barnstormer, ‘Bankers and Looters’ was released in 2012. ‘Zero Tolerance’ was released in April 2004, following on from ‘Just One Life’ (2000) and ‘The Siege of Shoreham’ (1996) and a live DVD of the band has just been released (2006). In addition to my solo DVD, ‘Live at the Heartland Café’ recorded in the US, and album ‘Live in Belfast’ I currently have two solo ‘Best Of’ CDs on release, ‘Poems Ancient and Modern (A Live Anthology 1980-1999)’ which is my definitive spoken word release to date, and ‘The Pen & The Sword’ (Selected Songs 1981-1995)’ which documents my best songs up until the formation of my band, now the main vehicle for my songwriting. My latest solo CD release is ‘Live in Norway’ (2007)

I am official Poet in Residence/PA/Announcer/DJ at my beloved Brighton & Hove Albion F.C. and (as the leader of ‘Seagulls Ska’) got to Number 17 in the Top 40 on 9th January 2005 with a new version of the Piranhas’ ‘Tom Hark’ – part of the campaign for the Albion’s new stadium….

Attila released his autobiography in september 2015. An autobiography like no other, ‘Arguments Yard’ bounces effortlessly from frontline tales of touring East Germany, the first ever punk performance in Stalinist Albania, being thrown out of one of his own gigs and the ongoing fight – often literally – with the fascist thugs who targeted him in the early 80s to more homely anecdotes: his coastal upbringing and love of his home in West Sussex, his passionate involvement in the battle to save his beloved Brighton and Hove Albion FC and his path from punk bass player into a career which has lasted decades longer than the ranting verse fad which spawned it.

Full of humour and intellect, and peppered with encounters with notable figures, ‘Arguments Yard’ demonstrates a depth rarely found in the everyday performer’s autobiography, and relates an important social history, being a left wing activist’s eyewitness journey through the great political battles and movements of recent times.

You can find out more about Attila on his website

Or read his column in Morning Star

Gelvis Paisley and the Contraband

Whats life without a wee bit o’ contraband? With Gelvis Paisley on Guitar,vocals and moothie{harmonica}, Randy Nimrod on Bass, Rhonda Nouvelle on Piano and vocals, Marco Von Ganje on Drums, Jicki May on Guitar and Glastobob on Banjo-Dobro and Double Bass Follow them on facebook Listen to them on the Faslane Peace Camp album  Or check them […]

Grace Petrie is a folk singer, songwriter, and activist from Leicester, UK. She first exploded on to the national protest scene in 2010 with the emotive anthem Farewell to Welfare, which captured perfectly the spirit of the new wave of dissent in austerity Britain. Since then, she has written, recorded and toured relentlessly. Her unique […]

Roy Møller was born in Edinburgh in 1963 and started writing poetry in his teens. He moved into songwriting and performing in his twenties, eventually releasing seven solo albums, playing a session for Marc Riley on BBC 6Music and one as a member of Jesus, Baby!, a group put together by Neu! Reekie’s Michael Pedersen […]

One thought on “Attila the Stockbroker”