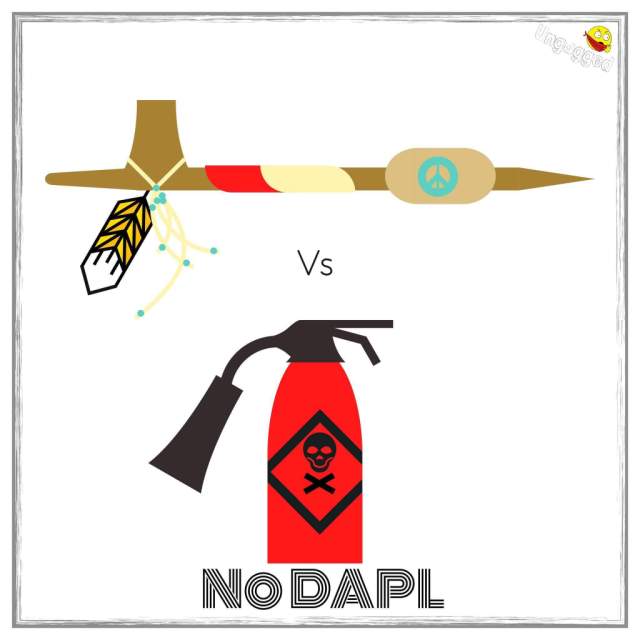 So for a while now I’ve been watching events in Dakota unfold. Protests against a massive pipeline for crude oil to travel across the United States, Canada and First Peoples Nations.

My brother had a girlfriend from Vancouver, she was from the Kwakwaka’wakw tribe and shared lots of great and wise stories with our family. My brother stayed in her lands too, and an elder honoured him with a spirit fire. I have nothing but admiration and respect for native American tribes.

I see these images and videos of the protest against the pipeline, and my heart weeps. How can police officers, dressed like they are about to launch a military assault, actively hurt these peaceful water protectors? How can they walk up to a group of innocents standing in a prayer circle and spray them, point blank in the face with fire extinguisher sized cans of pepper spray? The beautiful clear waters turned murky and foamy from all the chemicals. How can they fire beanbags and rubber bullets to folk just beating a drum? How can they shoot horses? What is going on? What on earth is happening?

Now this was a film about a white woman, playing a cowboy who shot native Americans, singing about a place she decided was hers. I didn’t realise the implications of Calamity Jane when I was wee, I don’t think the Sioux folk of Standing Rock will think much has changed.

Land that was stolen from under ancestral feet centuries ago, was then sold on to corporations. These corporations exploit the natural resources of these ancient and sacred lands. The Dakota Access Pipeline actively cuts through burial sites and life giving rivers.

The people protesting this destructive act are reliving what their forefathers had to go through. The level of brutality from law enforcement is despicable. It’s horrid and unwarranted. Water is the life blood of every living thing. Without it we cannot survive. We must stand with Standing Rock and support the water protectors. We must condemn the actions of the capitalist corporations. We must call out the authorities who huckle away native folk to hold them in a chain link cage, like an animal at a dog shelter. We must condemn the police who write numbers on the arms of traumatised and tearful protestors when they have been detained. We must shout loudly about these wrongs!

The company behind the pipeline, Energy Transfer Partners has links to Donald Trump’s presidential campaign and the man himself also, apparently, owns shares in ETP. We know this guy has beef with everyone but he seems to have a real issue with the Native American casino business’, maybe something to do with his own casinos failing so drastically? Something to raise an eyebrow at and keep an eye on.

The different tribes across United States of America govern themselves, they also have a “government to government relationship with federal authorities” however the Sioux people say these provisions were ignored regarding the pipeline construction. The Sacred Stone camp “reclaims land stolen by the US government in direct violation of the Fort Laramie Treaty of 1851, which affirmed it as sovereign unceded territory of the Great Sioux Nation.”

Indigenous tribes across the globe agree that on this planet there is one air, one ocean connected and only man makes borders. The black hills of Dakota is seen as the sacred heart, the coral reef in Australia seen as the blood filtration system and Scotland could easily be the water well of this world. Water is precious, the corporations know this and have forecast that in the very near future, H2O will be the most priceless commodity on the planet. There’s one thing though, water shouldn’t be a commodity or classed as a cash value resource. Water is life.

This report contains images some readers may find distressing.   The police watchdog, IPCC, is investigating after a 15 year old child was severely injured during an attempted arrest in South London on Tuesday night, needing hospital treatment. The boy, Terrell Decosta Jones-Burton, was treated in a critical care unit in a south London hospital […]

The silence of the left should shame us all, says Neil Scott