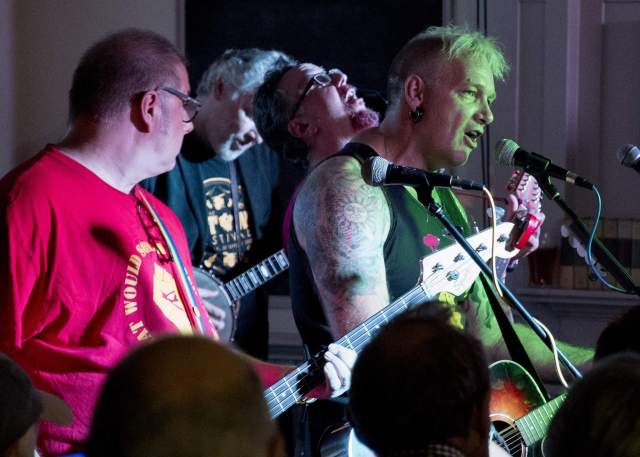 Steve White & The Protest Family are East London’s favourite folk punk political sing-along band. We may not be safe enough for the major labels, but we’ve definitely got something to say, and we’re going to say it, with wit, a certain brash charm, guitars, banjos, mandolins and, dare we say it,
moments of four-part harmony. Ours is a revolution that’ll have you tapping your foot and smiling from ear-to-ear. Thinking too, if we have our way.

Led by Steve, whose unplugged sessions have become something of a feature of the Tolpuddle Festival in recent years, the band features Funky Lol Ross on mandolin and electric guitar, and veteran of the East London music scene, Doug E Harper on bass. Meanwhile banjo duties fall to award-winning player and co-ordinator of the renowned Walthamstow Folk Club, Russ Chandler. Folk who’ve heard us make comparisons with Billy Bragg, Ian Dury and even The Clash.

In little under two years since their formation, Barnsley band The Hurriers have blazed a trail across the UK’s festivals and fundraisers. Fast gaining a reputation as the ‘go-to’ political band of the moment. The Hurriers now release their debut long player ‘From Acorn Mighty Oaks’ working with Sheffield producer Alan Smyth (Arctic Monkeys, Pulp, […]